The lake is one hectare in size and roughly follows the route of the Underground tracks from Barbican to Moorgate. The lake runs from Brandon Mews to Gilbert House, where it falls over a weir to a lower level under the bridge, and flows on towards the City of London School, where it turns south, under the school, and then east and west between St Giles’ Church and the Roman Wall to the Postern.

Water enters in a cascade from Brandon Mews and from fountains in front of the Arts Centre and is recycled from south of St Giles’ Church. The lake is naturally topped up for evaporation by rainfall, but it can be topped up from hydrant points. The water is completely circulated every two days.

The lake wasn’t just for show; it was also designed to provide air conditioning for the Barbican Centre. That is why historically the Barbican Centre have maintained the pumps. The pumps have to provide the water for the waterfall and the weir, as well as for the fountains. There were 42 fountains originally, but far fewer now.

The old system for moving water required several pump rooms under various nearby buildings. These have now been replaced with submersible pumps in the lake itself. With the new system, the cascade, the weir and the fountains can be operated separately. 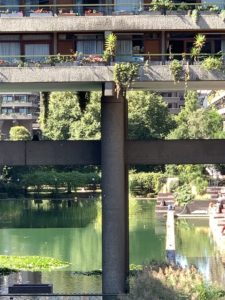 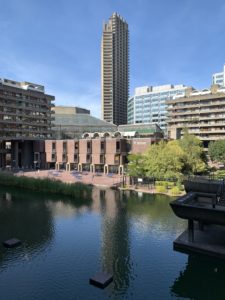